As a one-day project, I've created an implementation of Tetris in Python 3 (cli-tetris) that can be played from the command-line. I've since done a bit of tidying and added some nice-to-haves like linting, but 95% of it was done in that first day. The precise design may have some rough edges, but overall I'm pleased with the end result.

I'll describe the thought process that went into the code design and how the implementation works, and also what I'd improve on if I was to spend more time on it. The process of describing it is beneficial to me as a good way of self-documenting my thoughts, and maybe for other people too.

Here is a screenshot of a game in-progress: 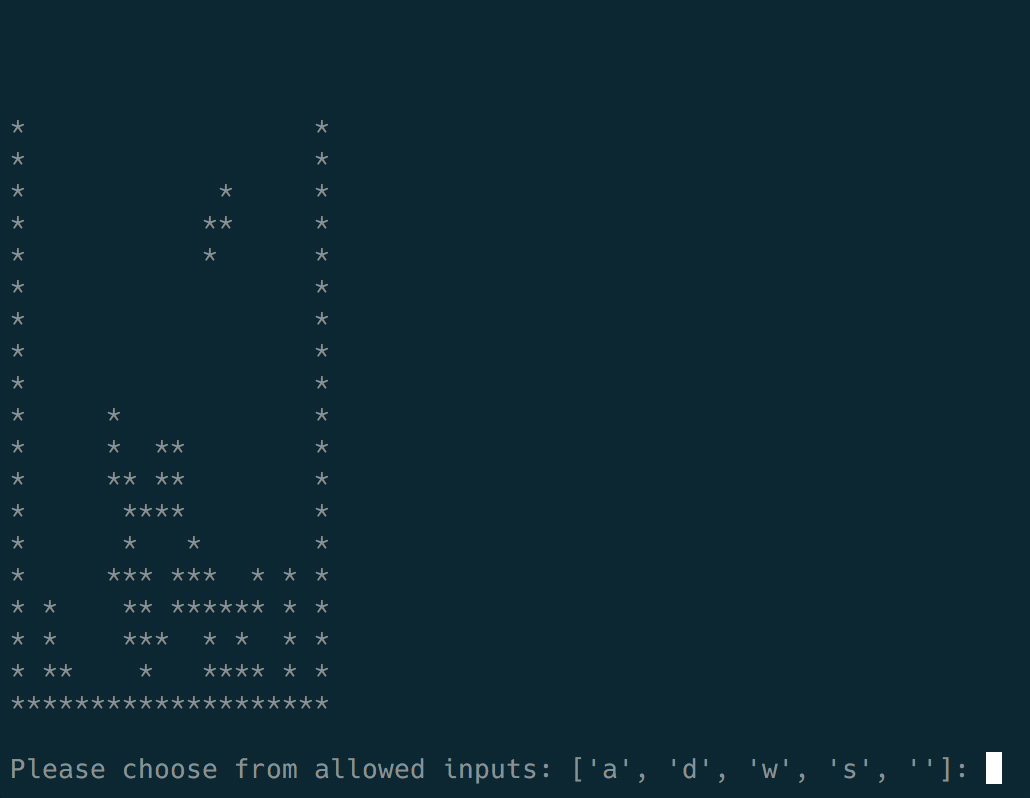 It's not quite a full Tetris implementation — for example completed rows are not destroyed.

Small personal projects like this can be great for learning and trying out ideas, and very satisfying to get something concrete made quickly, especially something that's just for fun. I planned most of the code design up-front — it evolved only a bit — as I encountered a couple of cases I hadn't considered upfront.

I've docstring'ed up all of the classes, so they are mostly self-documenting. Here are the classes, which can be viewed in Github:

I followed test-driven development with the following classes, which contain the meat of the logic in CLI Tetris:

The codebase is written in an object-oriented style. Having recently been learning OCaml and thinking more about functional programming styles, I decided that I didn't want any mutable state where I could avoid it.

With the goal of designing the codebase towards immutability (more on this below), I've made the object instance methods like Position.rotate() return a new instance with the updated state. I've applied this pattern to TetrisPiece, Layout and Position, which are the other objects that are created and destroyed during the life-cycle of the game. The only class with mutable state is actually GridSquare. This makes sense, since the GridSquare instances store information about what they are being occupied by, and grid squares represent the underlying substrate of the game. Instances of Element are placed into and removed from grid squares.

It turns out that having the ability to know that object instances always have all fields populated at any given moment is really useful. For one thing, it removes null checks throughout the code, and removes one class of bug as well as making the code a lot cleaner and nicer to look at. So anywhere in the code where I have hold of a TetrisPiece object, I know that its layout, position and elements properties are initialised.

When I was learning OCaml, I was getting used to programming without null checks, so this was part of my motivation for this strategy. OCaml doesn't even have a null value, so eliminates null-value bugs at the language level. I think coding without depending on null is a good practice.

TetrisPiece is one of the most interesting classes since it contains some important logic and also demonstrates the use of the Layout, Element and Position classes, which are designed to be generic components of game entities.

Layout describes the layout of a generic game entity. It is constructed from a list of Position instances, where each Position describes the location of a point in the Layout, each relative to the origin (0, 0) of the Layout. The Layout is therefore just a list of relative positions. The Layout class has methods for performing operations such as rotation and flipping (about its origin).

Element represents a single element of a larger game entity (e.g. TetrisPiece). It is constructed from an ElementType enum value and a Position instance, where the Position is the location of the Element relative to the origin of its parent entity.

TetrisPiece is constructed from a Layout instance and a Position instance. On initialisation, TetrisPiece creates an instance of Element corresponding to each position of its Layout.

When a TetrisPiece is translated (e.g. moved downwards), then the relevant method on Position is called, (e.g. Position.translate()), then a new TetrisPiece created with the new Position and the original Layout.

This API fulfils the two design goals of being object-oriented, yet providing 'pure', immutable objects to work with. I think object-oriented style is a great choice for game logic, and in this project the 'pureness' of the objects made the code feel simple to write and test.

I mentioned above that I was striving for immutability, but that it's not possible in Python at the language level. However some time ago as a fun challenge, I decided to see if I could use the power of overloading Python's magic methods, to see if I could create a class whose properties could be set once on initialisation and be made read-only thereafter. The result was the Immutable class used in this project.

The test class TestImmutable demonstrates how Immutable is used. I'll describe Immutable in another post, so won't go into detail here. It works for my purposes in this fairly esoteric project, but I'd probably not trust using it in production.

I'm a big fan of test-driven development (TDD), and from experience find that its biggest benefits are gained when the shape of the code is known beforehand, through upfront design.

The largest gains from TDD also come from testing the most complex logic, so if there is a necessary trade-off to be made, then it pays to have a good sense for where the most complex and important logic in the application is. The listing of test classes above illustrates where the real workhorse logic of the application lies (Tetris, TetrisGrid, TetrisPiece and Position).

Admittedly I've not made much use of Python docstrings before, but another really nice gain from these personal projects is in finding additional best practices along the way.

In this project, as well as flake8 to lint the code, I've also used flake8-docstrings. Adding a linting tool can be a great way to find many best practices in a language, and you can end up learning a surprising amount. flake8-docstrings really forced me to be thorough with documenting the code, and it's nice to know that in Python the docstrings are more than just normal comments.

On first glance at the TetrisPiece class, it may be surprising that it contains no methods like rotate or translate, which you may expect it to have, even if they delegate to the corresponding methods on Layout and Position.

Instead, TetrisPiece has really just one method moved:

TetrisPiece.moved() does the job of mapping enum values of MovementType into actual movement operations. On the one hand, this simplifies the API of TetrisPiece, and you can imagine a more general case with other types of game entity which can be manipulated in similar ways. This API gives the control of precisely how an entity moves to that entity.

However the limitation of mapping simple MovementType values into actual movement means that you cannot tell an entity how much it should move by, so this only works where each entity has a very standard, fixed way of moving. This caused me problems when I tried as an experiment, doubling the number of squares moved by tetris pieces in each go. I had to use a setting (MOVE_UNITS) in settings.py to determine this, then reference the MOVE_UNITS setting in in the TetrisPiece class.

However, having a variable movement distance was adding complexity to the logic determining whether a given TetrisPiece has a valid move from its current location (TetrisGrid.object_has_valid_move()), since possible downward moves could be either 1 or 2 squares, once the TetrisPiece is near the bottom of the board (or TetrisGrid).

Without adding the above extra logic, I was ending up with tetris pieces stopping 1 square away from the bottom of the board, instead of exactly at the bottom, because a valid fixed move of 2 squares downwards was not possible. This bug could also be avoided by always placing the tetris pieces an integer number of movement units from the bottom of the board at the start, but that would be a weak and there error-prone system.

So an improvement to the interface for telling entities how to move could be to send Action objects, which could combine a MovementType with a units value. This would allow the game to tell a TetrisPiece how much it should move by in any given movement, whilst still encapsulating exactly how e.g. a TetrisPiece is rotated within its own class. Therefore references to settings.MOVE_UNITS could be confined to just the TetrisGrid class, and the logic in TetrisGrid.object_has_valid_move() could enumerate possible moves as a list of more flexible Action instances as opposed to MovementType.