All of my source code lives in a tree of Git submodules, extending downwards from my 'master' source repository, which is simply named robin. This giant tree of code includes everything I have ever written — both practice and project code.

I recently became frustrated with the command git submodule foreach --recursive, which allows one to execute a given shell command for each submodule, recursing down the submodule tree. My frustration was with the inability to recurse upwards using this command. The reason I wanted this functionality was so that I could save all of my code changes using a single command — adding, committing and pushing changes in each repo, from the lowest submodule to the topmost parent.

I had devised a system for the repositories that I commonly used, which involved creating a submodules.csv file in each of these directories. It was simple to use some Ruby code inside of a Rake task to parse these files, but in the end I never ended up using the 'save all' functionality — it just wasn't practical, and my submodules.csv files quickly became neglected.

Whilst doing a fresh clone of my code on another laptop, I decided that I wanted to be able to do git checkout master on each cloned repository directly after cloning, since on a few occasions I ended up making, committing and pushing changes on a detached commit from the previous recursive clone.

More recently, just for fun I started wondering 'just how many submodules do I have in my tree?' And 'what would this tree look like?' — if I were to make a graphical representation of it. I realised that I actually wanted the power to do any action for each submodule, whether or not I was recursing upwards or downwards. Since I am also currently enjoying learning the Ruby language, I finally found a justification for writing my own .gitconfig-style parser, in order to parse the .gitmodules files which are an actual source of truth and necessarily maintained.

Once this was complete, I could work on code for manipulating submodules and .gitconfig files. It was a fun project for a Sunday afternoon, followed by minor tweaks and a few feature additions over the next week. Although this whole project was quite frivolous, it was pretty enjoyable as I wanted to apply my test-driven-development technique in Ruby, as well as learn some more advanced features of Ruby along the way. It was also a nice code design exercise.

Here is an example of drawing a git module tree, using the command rake git:foreach nil:

The 'drawing' of my code tree is simply a special case usage of the rake git:for_each task, where I am passing no action, and it defaults to pretty-printing each module.

I found it useful to be able to sort my .gitmodules file. I can do this using the command rake git:sort_sub: 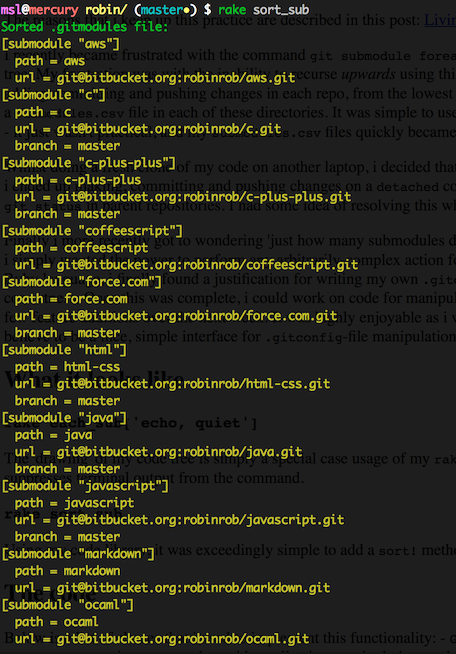 It was really simple to add a sort! method to my GitConfigFile class, which delegates to a GitConfigBlockCollection class to perform the sort. Using the foreach task, this sorting task could be executed for all modules in a tree if you wanted.

Below is a list of classes that I used to implement this functionality:

As a fun project, this definitely fulfilled the goal of speeding up my learning of Ruby, as well as helping me get to sleep on a few nights. And as a bonus I do actually use some of the rake tasks quite regularly.